A Pain In The Neck!

Neck pain may be attributed to a variety of factors, including muscle strain, ligament sprains, arthritis of neck joints or degenerative in nature, commonly known as cervical spondylosis. Approximately 10 percent of adults have Cervical spondylosis at any one time. Fortunately, most patients, regardless of the cause of pain, get better with conservative therapy.

Structures in the neck

In order to better understand your cervical spondylosis, it is useful to identify some basic structures that it comprise of. The neck, or cervical spine, is formed by seven square-shaped bones (cervical vertebrae), which are stacked one on top of another. The vertebrae are named for their position in the cervical spine, beginning at the top with C1 down to C7. Together with the supporting ligaments and the overlying long neck muscles, the cervical vertebrae form a spinal canal that surrounds and protects the spinal cord (Figure 1). 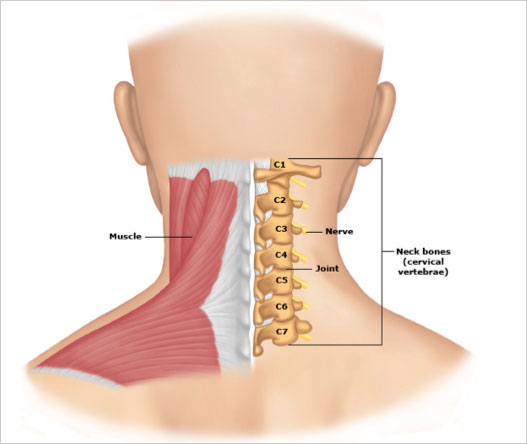 In between the neck bones are discs, which function as shock absorbers, cushioning one bone from another. Directly over the bones and the discs is a layer of strong ligaments. These thick tissues are attached directly to the bones and function to limit the movement of one vertebra against the other. Car accidents and injuries to the head or body can cause injury to these ligaments and the joints that it supports.

Overlying the small muscles that support the vertebrae, the major muscles of the neck form the next protective layer. These muscles are responsible for holding the head up, maintaining normal posture, and supporting the neck. Overuse and irritation of these larger muscles is often called neck strain. Muscular strain is not cervical spondylosis.

How Is Cervical Spondylosis Diagnosed?

The evaluation of Cervical spondylosis usually begins by observing the person’s ability to turn the head to the left and right, forward and backward, and side to side. Your specialist doctor will observe the posture and movement of the neck and shoulders. He will feel the muscles in the neck, head, upper back, and shoulders to detect areas of pain, weakness, or tension. If weakness or sensory complaints are present, strength and sensation in the extremities will also be examined.

In some more complex cases, further testing, such as an x-ray, magnetic resonance imaging (MRI) or electrodiagnostic testing (EMG or electromyography) will be recommended. Even though most cases of Cervical spondylosis can be treated conservatively, it is mandatory to see your specialist for anyone with a head or neck injury, inability to control the bowels or bladder, severe pain, numbness or changes in sensation in the arms or legs, or if pain does not begin to improve after one week with treatment at home.

What Is The Prognosis For Cervical Spondylosis?

Can You Prevent Cervical Spondylosis?

Cervical spondylosis refers to degenerative changes to the structures of the cervical spine that takes place over time. Proper neck posture and good ergonomics may slow down its onset but there is no real way to prevent or avoid it. However, there are some neck stretching and strengthening exercises that will benefit almost everyone.

Stretching exercises — Apart from maintaining flexibility, stretching exercises can also help to decrease pain from muscle injury. Exercises can be performed in the morning to relieve stiffness and again at night before going to bed. Sharp or electric like pain in the shoulder or arm is not normal and should be reported to your specialist doctor.

The most useful stretching exercises for the neck include the following:

Vertical shoulder stretches — In the sitting or standing position, use the right hand to hold the left wrist and pull the arm (and shoulder) up and over the head, towards the right. Hold for five seconds. Keep the left shoulder and back muscles relaxed. Rest and repeat 10 to 15 times. Repeat using left hand to hold right wrist.

Upper back stretches — In the standing position, lean forward from the hips and rest both hands on a low counter with the elbows straight. Exhale, relax the neck and shoulders, and allow the head to fall forward as you round the upper back. This requires the shoulder blades to spread apart and mimics the motion of a cat stretching its back. Exhaling with the motion helps to relax the muscles. Return to the standing position with hands on a counter. Repeat slowly 10 times.

Basic neck strengthening — In the same forward positioning as the upper back stretches, after allowing the head to fall forward, raise the head by looking forwards keeping the neck in a straight line as the upper back and hold for 10 seconds. This trains the neck muscles that keep the neck upright. Repeat slowly 10 to 15 times.

Prevention and Posture — Activities and body positions that prevent or reduce Cervical spondylosis include those that emphasize a neutral neck position and minimize tension across the supporting muscles and ligaments of the neck. Extremes of range of motion, activities, and body positions that cause constant tension should be minimized or avoided:

What most patients do not realise is that most cases of Cervical spondylosis can be treated conservatively with over-the-counter pain medications, ice, heat and massage, and strengthening and/or stretching exercises at home.

a. Ice — For some people, ice can reduce the severity of Cervical spondylosis. It can be applied directly to the sore area of the neck. Ice can be frozen in a paper cup, and then the upper edge of the cup can be torn away. The ice should be moved continuously in strokes on the neck muscles for five to seven minutes.

b. Heat — Heat can help to reduce pain in the neck muscles. Moist heat can be applied for 10 to 15 minutes in a shower, hot bath, or with a moist towel warmed in a microwave. However, acute injuries should utilize ice as the initial treatment. Heat may be used initially for patients who have cold intolerance to ice.

Many patients may have also attempted acupuncture, biofeedback, cervical collars, cervical traction and other forms of physical therapy. In particular, some studies have found that treatments that include quick “thrusting” of the neck are associated with serious injury. Aggressive manipulation or adjustments to the cervical spine should be discouraged in elderly patients and those with cervical stenosis. Cervical traction involves the use of weights to realign or pull the spinal column into alignment. Clinical studies have shown that there is no benefit of traction in the treatment of Cervical spondylosis.

Is Surgery The Next Step?

Most practitioners will agree that surgery may not be useful for treating most types of Cervical spondylosis. However, surgery does have a role in relieving symptoms related to a pinched nerve caused by a moderately large herniated disc after a trial of conservative therapy (eg, stretching exercises, physical therapy). Most patients however, will only consider surgery as their last option and as a result, they end up enduring a significant amount of pain in the process.

The good news is that today, modern medicine has a much greater understanding of Cervical spondylosis than previously. As there are many varied causes of Cervical spondylosis, there are also as many options of non-surgical interventions that act as the “missing link” between conservative care and surgical options. As a matter of fact, there are many more options for resolving pain, even for people who think — or have been told — that “nothing else can be done.”

Minimally invasive procedures that target these sources include trigger point injections, diagnostic nerve root blocks, facet joint blocks or radio-frequency ablation, and discography. The choice of procedures will ultimately depend on what is diagnosed as the main cause of Cervical spondylosis in the individual patient.

Dr G himself is a general practitioner but attributed his Cervical spondylosis to degenerative changes in his cervical spine. As a result he suffered from Cervical spondylosis for close to 4 years before deciding to come for treatment. One of the reasons that prompted him to do so was that he started developing gastritis as a result of the painkillers he had been taking. Dr G underwent percutaneous radio-frequency facet joint treatment, performed under X-ray guidance. He had since then stopped taking his pain medications and had also resumed playing golf again.